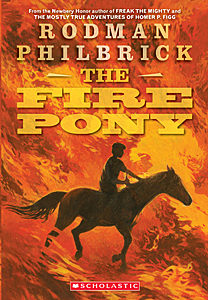 Joe Dilly has a secret way with horses--and with fire. His kid brother, Roy, knows about both secrets, but he's not telling. Not when he and Joe hire on at the Bar None, a ranch that has a few secrets of its own. At the ranch Roy, finds a wild pony that can run like the desert wind--and if he can break that pony, he can keep her. In a thrilling scene, Roy's dream comes true when he races the pony of his dreams. (copy continues)