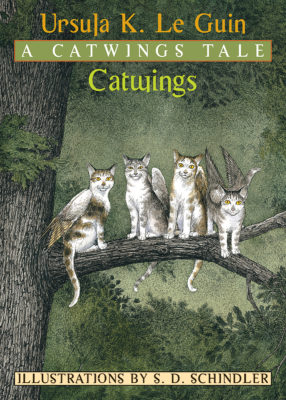 Mrs. Jane Tabby can't explain why her four precious kittens were born with wings, but she's grateful that they are able to use their flying skills to soar away from the dangerous city slums where they were born. However, once the kittens escape the big city, they learn that country life can be just as difficult!
Ursula K. Le Guin

Ursula Le Guin writes both poetry and prose, and in various modes including children's books, YA books, fantasy, science fiction and fiction. She is the author of the bestselling and award winning CATWINGS series. Three of Le Guin's titles have been finalists for The American Book Award and the Pulitzer Prize, and among the many honors her writing has received are a National Book Award, five Hugo Awards, five Nebula Awards, and The Margaret A. Edwards Award. She lives in Oregon.