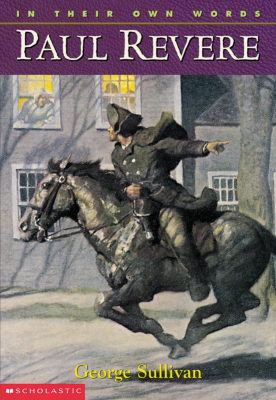 On April 16, 1776, Paul Revere made his famous Midnight Ride. In Their Own Words, Paul Revere brings this legendary ride to life like never before.
Excerpts from Paul's own account of that night will excite young readers:

I turned my horse very quick, and Galloped towards Charlestown neck,
and then pushed for the Medford Road. The one who chased me,
endeavoring to Cut me off, got into a Clay pond, near where the new
Tavern is now built. I got clear of him . . .

Children will also discover that Paul was active in many of the pivotal events
that led to the Revolution. A member of the Sons of Liberty, Paul was assigned to guard the tea ship that docked in Boston Harbor. When the ship would not turn back, Paul participated in the Boston Tea Party:
Rally Mohawks! Bring out your axes,
And tell King George we'll pay no taxes
On his foreign tea . . .
Our Warren's there, and bold Revere
With hands to do and words to cheer
For Liberty and laws
Children will see Paul's sketch of the Boston Massacre that was used in the trial of the British soldiers involved in the event.. They will also find out about other famous Americans that Paul knew. Through his numerous rides as messenger, Paul became acquainted with many of the members of the Continental Congress, particularly John Hancock and Sam Adams.

In Their Own Words: Paul Revere also tells the story of a successful
businessman. Paul was an accomplished silversmith. He cast the first bell
made in America, and opened a gun powder factory in Massachusetts during the Revolution. He was asked to design and print money for the Continental
Congress, and he opened the first copper rolling mill in the country.

In Their Own Words: Paul Revere concludes by describing the ways in
which this remarkable figure is remembered today and tells children how
they can find out more about Paul Revere.