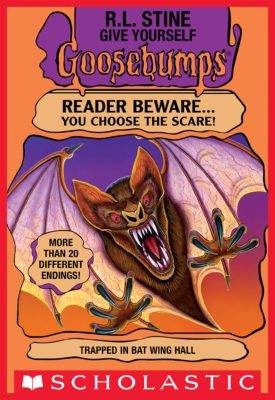 Give Yourself Goosebumps: Trapped in Bat Wing Hall

Being the new kid in school is no picnic. At your old school you had tons of friends, but now you don't even have one. Then you meet Nick. He asks you to join Horror Club.

The Horror Club meets in an old mansion known as Bat Wing Hall. It's dark. It's spooky. And it's where your adventure begins. The members of the Horror Club are going on a scavenger hunt. If you join the red team, you find out the truth about your new friends- they're actually monsters! One is a green-skinned reptile. Another is a hulking giant! If you join the blue team you get turned into a furry-faced vampire bat!