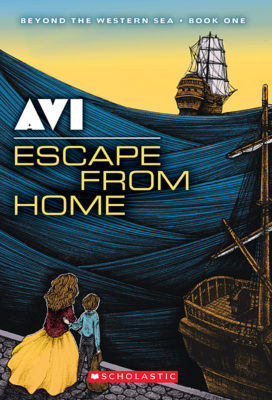 Series: Beyond the Western Sea

Avi's suspense-filled, seafaring adventure gets a bold new package!It's 1851. Fifteen-year-old Maura O'Connell and her twelve-year-old brother Patrick are about to set sail on an epic voyage to America to flee the brutal poverty of Ireland and to be reunited with their father.Eleven-year-old Laurence Kirkle, the son of an English lord, runs away from home to escape his cruel older brother and start a new life in a new world.All three children face nothing but obstacles along the way--from stolen money to con men to hunger and fatigue. It seems that none of them will get out of the port city of Liverpool until fate brings them together. Avi's masterful plot-spinning skills create an adventure filled with unexpected twists and turns.

Avi's work spans nearly every genre and has received nearly every major prize, including the Newbery Medal for Crispin: The Cross of Lead and Newbery Honors for Nothing But the Truth and The True Confessions of Charlotte Doyle. Avi lives in Colorado. You can learn more about him online at avi-writer.com.