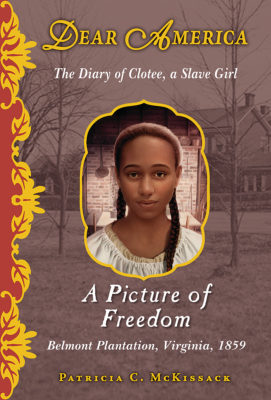 Dear America: A Picture of Freedom

It's 1859 and Clotee, a twelve-year-old slave, has the most wonderful, terrible secret. She knows that if she shares it with the wrong person, she will face unimaginable consequences. What is her secret? While doing her job of fanning her master's son during his daily lessons, Clotee has taught herself to read and write. However, she soon learns that the tutor, Ely Harms, has a secret of his own.

In a time when literacy is one of the most valuable skills to have, Clotee is determined to use her secret to save herself, and her family.