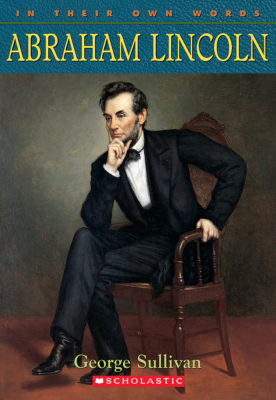 In Their Own Words : Abraham Lincoln

If any personal description of me is thought desirable, it may be said, I am in height, six feet four inches, nearly; lean in flesh, weighing on an average, one hundred and eighty pounds; dark complexion, with coarse black hair and grey eyes-no other marks or brands recollected.

In December 1859, Abraham Lincoln wrote a brief history of his life for a newspaper article. The next year, Lincoln would be elected to serve as president of a divided United States. His strong leadership would change American history.

Did you know that Abraham Lincoln

· went to school for no more than a year?
· managed a general store?
· was asked to serve as governor of the Oregon Territory?
· lost two elections?
· asked African Americans to join the Union army?
· believed his Gettysburg Address was unsuccessful?
· was the first president to appear on an American coin?

In Their Own Words: Abraham Lincoln tells the exciting story of the life of the sixteenth president of the United States using his own writing and speeches. Children will hear Lincoln's story as if they were really there.