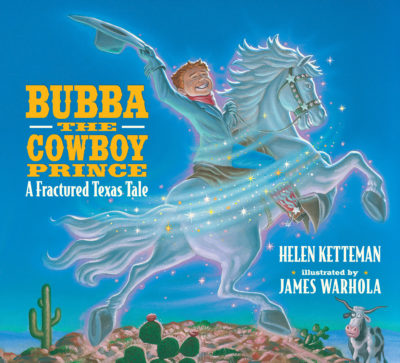 Bubba, a cheerful soul, leads a miserable life. His wicked step-daddy and two nasty step-brothers, Dwayne and Milton, are at him all day long. When he's not doing their chores, he's cleaning the stables, roping the steers or branding the cattle. When will it ever be Bubba's turn to shine?
Miz Lurleen, the purtiest (and richest!) rancher in Texas, is tired of ten-dollar Stetsons on 2-cent heads. She aims to find herself a real man, and a hoe-down ball is just the way to do it.
With the help of a fairy godcow and the loss of a cowboy boot, Bubba and Miz Lurleen find each other--and true love--in this funny, fractured role-reversed Texas Cinderella.
Helen Ketteman

Author of the popular children's book, Armadillo Tattletale, Helen Ketteman is an exceptional writer of over 13 books and has appeared on both television and radio. She has an Associates of Arts Degree from Young Harris College in Young Harris, GA and a Bachelor of Arts Degree in English from Georgia State University in Atlanta. She has taught both high school English and elementary school and has also taught continuing education classes in writing picture books at the Southern Methodist University in Dallas. She has spoken to adult writing classes on writing picture books, and often visits elementary schools. She is currently living in San Francisco, CA.

Artist and illustrator James Warhola is the nephew of Andy Warhol. He received a Bachelor of Fine Arts degree in design from Carnegie Mellon University and then studied at the Art Students' League of New York. He has designed over 300 science fiction and fantasy covers for books by such authors as Spider Robinson, Heinlein, and W. Gibson. He also serves as a consultant to the Museum of Modern Art (the Warhol Family Museum) in Medzilaborce, Ruthenia, the ancentral home of the Warhol family.

Since 1987, he has concentrated on illustrating children's books, including If You're Happy and You Know It and The Wheels on the Race Car for Orchard Books. He wrote and illustrated Uncle Andy's, which won a 2004 IRA Children's Book Award.

James Warhola lives in Tivoli, New York, with his family.