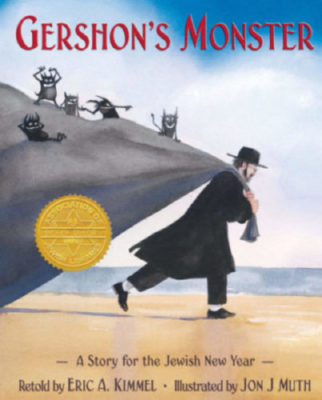 by Eric A. Kimmel, Illustrated By Jon J Muth

There was once a baker named Gershon who was a sinner. His sins were the common ordinary, stuff; a few little lies, a broken promise, a temper lost for no reason. But unlike most people, Gershon never regretted what he had done. He never apologized or asked anyone's forgiveness. Why should he? He merely swept the little monsters up and tossed them into the celler. Then, once a year, on Rosh Hashanah, he would stuff them in a sack and throw them into the sea. Why should he bother asking anyone for forgiveness when getting rid of them was so easy?
It was only a matter of time, though, before Gershon's bad ways caught up with him. And they did come back to haunt him. One day, as his two children played by the sea, those sins he thought he'd gotten rid of had grown into a giant sea monster! Now they threatened what was most dear to him: his beloved children. Was it too late for Gershon to save them from his own mistakes?

Eric A. Kimmel is an American Jewish author of more than 50 children's books.