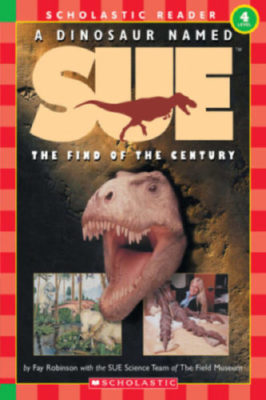 When Susan Hendrickson set out to explore the rocky terrain of South Dakota, she had no idea of the awesome discovery that awaited her. Susan had never found more than a few dinosaur teeth and small bones. But on a routine archaelogical dig one hot day in 1990, she came upon something that would astound the world; a 90% complete Tyrannosaurus rex skeleton -- the most complete T. rex ever discovered!
The T. rex was named "Sue" in honor of her founder. The Field Museum of Chicago bid more than 8 million dollars at a Sotheby's auction to make their museum Sue's home. Today, as scientists at the museum painstakingly work to restore Sue's bones, they are learning and discovering new information about T. rex and the times in which it lived. Visitors to the museum are given the rare opportunity to watch this work through a specially built fossil preparation lab enclosed in glass. Scientists expect to be learning important facts from Sue's bones for years, even centuries, to come!
Fay Robinson