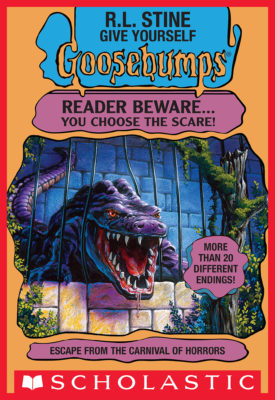 Give Yourself Goosebumps: Escape from the Carnival of Horrors

Late one night you and your friends visit the old fairgrounds. They're putting up rides and booths for the annual carnival. But this year things look really different. Really odd. Really scary.

The place is lit up by a hundred fiery torches. And spooky music is coming from the main tent. Then you meeting Big Al, the creepy carnival manager. He's invited you in to test some of the rides. Will you brave the terrifying Supersonic Space Coaster? Risk the horrors of the Reptile Petting Zoo? Slice through the oily waters of Booger Bog? Or confront the evil Snake Lady?