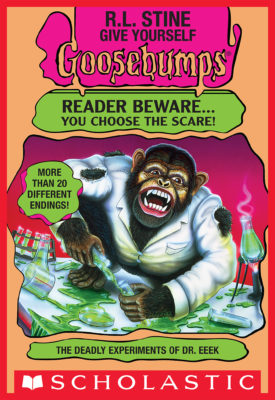 Give Yourself Goosebumps: Deadly Experiments Of Dr. Eeek, The

Top secret and dangerous. That's what your mom, a famous scientist calls, the research she's been doing at the labs of Dr. Eeek. You're dying to know what it's all about.

Then one day you get lost in the labs. Before you know it you've become a human guinea pig in Dr. Eeeks deadly experiments!

If you choose one lab, you meet a dog wearing sneakers. He's half dog, half kid. And now he's after you!
If you choose another lab, you get lost in a maze-a maze that just happens to be the home of an enormous rat! The choice is yours in this scary GOOSEBUMPS adventure that's packed with over 20 super-spooky endings!