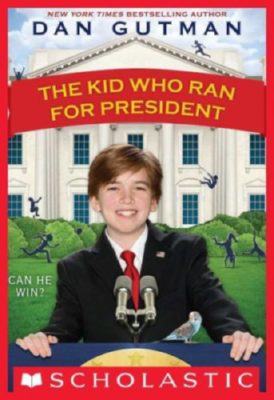 The Kid Who Ran For President

Just in time for election season, Dan Gutman's hugely popular THE KID WHO RAN FOR PRESIDENT is back. Humor, adventure, and excitement will draw kids into the world of elections and politics."Hi! My name is Judson Moon. I'm 12 years old and I'm running for President of the YOU-nited States."So begins this fast-paced, funny, and surprising account of a boy's run for the Oval Office in the year 2000. Under the tutelage of Lane, his brainy friend and self-appointed campaign manager, the affable sixth-grader from Madison, Wisconsin, takes on the Democrats and Republicans as a Third Party candidate who can make waves. "Grown-ups have had the last one thousand years to mess up the world," Judd tells a reporter. "Now it's our turn."

Dan Gutman has written over a hundred books for young readers, such as The Homework Machine, the My Weird School series, the baseball card adventure series, and many others. He lives in Haddonfield, New Jersey with his wife Nina and their two children.