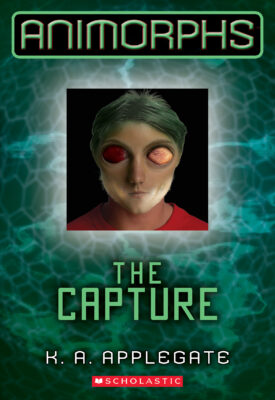 It was bad when Jake found out his brother was one of them. A Human-Controller. A slave. But that was nothing compared to this.

When the Animorphs decide to visit the Yeerks' new base, it seems simple. But then they get caught and Jake falls -- just for a moment -- into the Yeerk pool.

Now they're out, and his friends can't see it. To them he's just like normal. But Jake is screaming for help. His worst fear has finally come true. He's become the enemy.

I was still behind the whirlpool, out of sight. I was trying to focus on morphing into tiger form for a fight.
\tBut then, two more men, dressed in uniform as guards, came plowing into the room. The first one leveled a gun.
\t“Ax!” I shouted. “A gun!”
\tAx's tail flashed.
\t“Aaaargghh!” the Controller screamed.
\tThe hand that had been holding the gun was no longer attached to the man's arm.
\t“Get back up to the pool area! Andalites!” the second guard screamed into a walkie-talkie. Then he drew his gun.
\tBLAM! BLAM!
\tThey told me later there was a third shot. But I didn't hear it.
\tA sledgehammer blow struck the side of my head. A ricochet. For a brief second I clung to consciousness. But then, I swooned. I fell.
\tFacedown in the whirlpool.
\tFacedown in the bubbling, boiling mass of dying Yeerks."