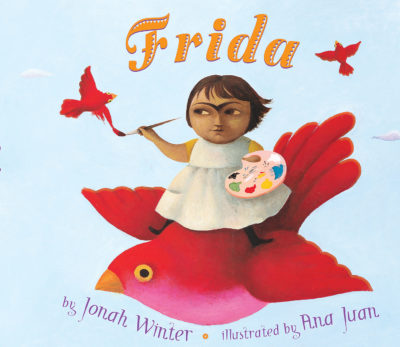 When her mother was worn out from caring for her five sisters, her father gave her lessons in brushwork and color. When polio kept her bedridden for nine months, drawing saved her from boredom. When a bus accident left her in unimaginable agony, her paintings expressed her pain and depression - and eventually, her joys and her loves. Over and over again, Frida Kahlo turned the challenges of her life into art. Now Jonah Winter and Ana Juan have drawn on both the art and the life to create a playful, insightful tribute to one of the twentieth century's most influential artists. Viva Frida!

Ana Juan illustrated Frida, Jonah Winter's picture book biography of Frida Kahlo, which was an ALA Notable Book and received an Américas Honor Award. She also received the Ezra Jack Keats award for The Night Eater, her first book as author-illustrator. She lives in Madrid, Spain.

Jonah Winter has written many exciting picture book biographies for children, with subjects that include Frida Kahlo, Diego Rivera, Barack Obama, and Dizzy Gillespie. He lives in Pittsburgh, Pennsylvania.