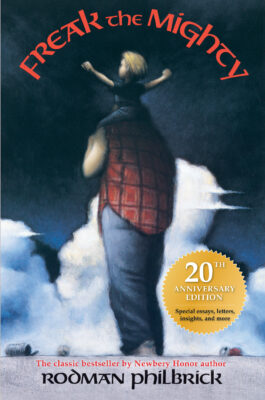 It has been twenty years--and more than two million copies, eight foreign editions, and a popular Miramax feature film--since the world was introduced to this powerful story of a unique friendship between a troubled, oversized boy and the tiny, physically challenged genius who proves that courage comes in all sizes. This simple yet timeless story explores many themes, including bullying--an important topic in today's schools. Now we have a new edition to celebrate this poignant novel's success.

Thirty-two pages of new content offers: extensive Q&A with the Newbery Honor-winning author; letters between the author and fans; author's exclusive commentary on the film, THE MIGHTY, and the book's effect on a generation of readers; and the original text.

Perfect for teachers, librarians, and perennial fans, this anniversary edition is also a spectacular introduction for new readers. FREAK THE MIGHTY is sure to remain fresh, dramatic, and memorable for the next twenty years and beyond!

--- - ! "Well, I was a butthead, because like I said, I never had a brain until Freak moved down the street. That summer before eighth grade, right? That's the summer I grew so fast that Grim said we'd best let the boy go barefoot, he's exploding out of his shoes. That barefoot summer when I fell down a lot, and the weirdo robot boy with his white-yellow hair and his weird fierce eyes moved into the duplex down the block with his beautiful brown-haired mom, the Fair Gwen of Air.
\tOnly a falling-down goon would think that was her real name, right?
\tLike I said.
\tAre you paying attention here? Because you don't even know yet how we got to be Freak the Mighty. Which was pretty cool, even if I do say so myself."