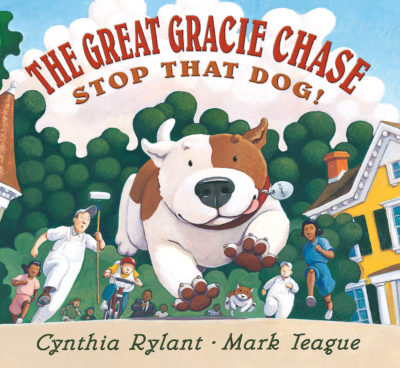 The Great Gracie Chase: Stop that Dog! : Stop That Dog!

Gracie is a dog who enjoys the quiet life. For her, there's nothing more pleasant than sitting indoors, resting peacefully. One day, however, Gracie's world is turned upside-down with the arrival of some noisy, bustling painters. Gracie barks at them, ordering them out of her house, but to her surprise, Gracie is put out instead.

When Gracie decides to take a walk outdoors-all by herself-it doesn't take long for someone to notice she's missing. Soon, the painters, the neighbors, the garbage man and the paperboy are running after her, and Gracie can't figure out why . . . so she keeps on running! Soon the whole town joins in the chase, but Gracie outruns them all and returns home-all by herself.

Cynthia Rylant has written more than 100 books, including Dog Heaven, Cat Heaven, and the Newbery Medal-winning novel Missing May. She lives with her pets in Oregon.