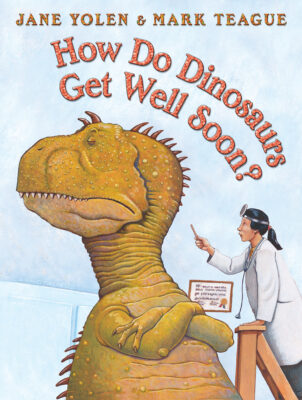 How Do Dinosaurs Get Well Soon?

What if a dinosaur catches the flu?
Does he whimper and whine between each "At-choo"?
Does he drop dirty tissues all over the floor?
Does he fling his medicine out of the door?
Just like kids, little dinosaurs hate being sick. And going to the doctor can be pretty scary. How DO dinosaurs get well soon? They drink lots of juice, and they get lots of rest; they're good at the doctor's, 'cause doctors know best.
As in their previous book, Yolen and Teague capture children's fears about being sick and put them to rest with playful read-aloud verse and wonderfully amusing pictures.

Jane Yolen is the beloved author of more than 365 books for children and adults, including award-winning picture books, fiction, nonfiction, and poetry. In addition to two Nebula Awards and a National Book Award nomination, she has received a Golden Kite from SCBWI, three Mythopoeic Fantasy Awards, and the California Young Reader Medal. Yolen's How Do Dinosaurs Say Good Night? was an ALA Notable Book and a Christopher Medal winner. The book has gone on to become a widely popular bestselling series with over 15 million copies in print. She lives in Western Massachusetts.