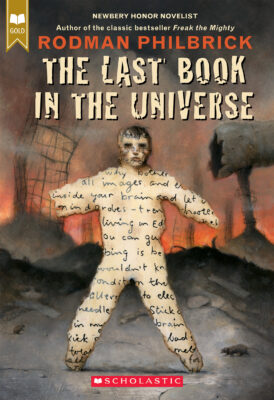 The Last Book In The Universe

Nobody around here reads anymore. Why bother, when you can just shoot all the images and excitement straight into your brain? I've heard of books, but they were long before I was born, in the backtimes before the Big Shake...

In a world where people only use mindprobes for entertainment, a teenaged boy is one of the rare human beings who can see life for what is really is. Cruelly nicknamed "Spaz", he is subject to random seizures that make it impossible for him to use the brain-drain tech. But what sets him apart eventually becomes his salvation.

After meeting an old man called Ryter, Spaz begins to learn about how the world used to be before the catastrophic earthquake that changed everything. There is a story of a promised land, rich in its bounties, that can cure any ailment and more beautiful than any place left in the desolate wasteland humanity calls home. The two set off to find Eden in the hopes of saving Spaz's dying sister, and together, seek to bring some good back to the world.

Fahrenheit 451 meets The Giver in this action-packed thriller from the author of the bestselling novel Freak the Mighty.