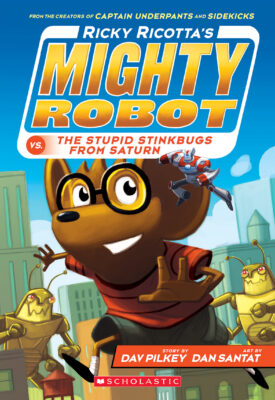 Ricky Ricotta's Mighty Robot vs. The Stupid Stinkbugs from Saturn

Ricky Ricotta and his Mighty Robot are in another stinky situation!

Ricky's family is headed to Cousin Lucy's house for lunch -- how boring! Ricky and his Robot are hoping to have a little fun with Lucy's pet Jurassic Jackrabbits, but when they get there, Lucy makes them play princess with her instead! What could be worse?

An invasion of Stupid Stinkbugs from Saturn, that's what! Smelly Sergeant Stinkbug has arrived on Earth with a plan to kidnap its ruler, and Princess Lucy fits the bill. Now it's up to Ricky and his Mighty Robot to plug their noses and send those stinkers back into space!

--- - ! "From RICKY RICOTTA'S MIGHTY ROBOT VS. THE STUPID STINKBUGS FROM SATURN #6

Ricky and his Mighty Robot flew into the backyard.
\tThere was Lucy, having a tea party with her pets.
\t\"Wow!\" cried Ricky. \"Look how big your Jurassic Jackrabbits got!\"
\t\"They like to eat,\" said Lucy. \"So I named them Fudgie, Cupcake, and Waffles.\"
\tRicky rolled his eyes.
\t\"Let's play princess!\" Lucy said.
\t\"No way!\" said Ricky.
\t\"Oh, come on,\" Lucy begged. \"I'll be the beautiful princess, and you can be the ugly prince. Fudgie, Cupcake, and Waffles will be our royal ponies, and your Robot can be the big, brave knight.\"
\t\"What part of 'no way' don't you understand?\" asked Ricky.
\t\"Now boys,\" said Ricky's father, \"I want you to play nicely with Lucy.\"
\t\"Rats!\" said Ricky. \"This is turning out to be a very bad day.\"
\tBut what Ricky didn't know was that things were about to get much, much worse, much worse."