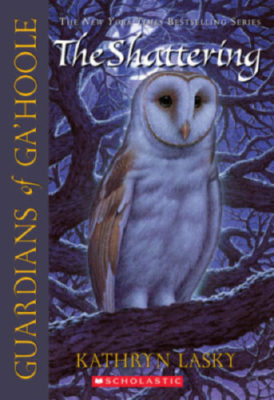 Guardians of Ga'Hoole #5: The Shattering

In the midst of war, Eglantine unwittingly becomes a spy for Kludd, leader of the Pure Ones (a group of evil owls). She is brainwashed by an owl sent by the Pure Ones to infiltrate the Great Ga'Hoole Tree. Her odd behavior eventually attracts attention, and Soren and his friends vow to find out what's wrong with Eglantine. They ultimately learn what happened and help her reverse the effects of the brainwashing.

Kludd continues to battle against the Guardians of Ga'Hoole for control of their tree. In the end, Kludd and his forces are defeated. But his conflict with Soren is not yet over.