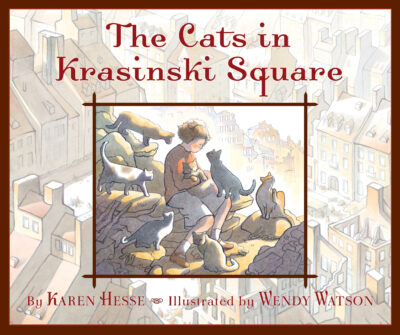 The Cats In Krasinkski Square

When Karen Hesse came upon a short article about cats out-foxing the Gestapo at the train station in Warsaw during WWII, she couldn't get the story out of her mind. The result is this stirring account of a Jewish girl's involvement in the Resistance. At once terrifying and soulful, this fictional account, borne of meticulous research, is a testament to history and to our passionate will to survive, as only Newbery Medalist Karen Hesse can write it.

Karen Hesse is the award-winning and critically acclaimed author of many books for children. Her titles include Witness, The Cats in Krasinski Square, and the Newbery Medal winner Out of the Dust, among many others. She lives in Vermont with her husband and two teenaged daughters.

Wendy Watson is the author and illustrator of Hurray for the Fourth of July. She was raised with seven brothers and sisters on a farm in Vermont, where she received her early education and art training from her mother and father. She studied painting in Truro, Massachusetts and at the National Academy of Design in New York City. She is the author-illustrator of more than a dozen children's books, including Thanksgiving at Our House, A Valentine for You, and the Clarion edition of Clement C. Moore's The Night Before Christmas. She lives with her family in Vermont.