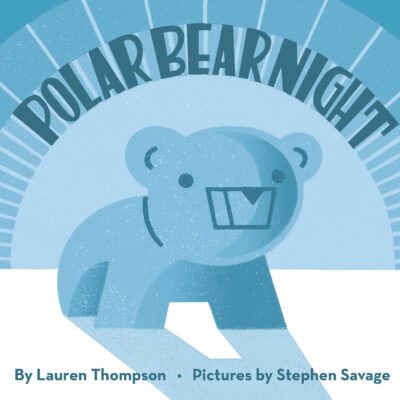 One keen, clear night, a polar bear cub wakes inside her warm den. Something in the moonlit stillness quietly beckons. What is it?

The little cub sets out for the snow and sky and sea and ice, and the moon follows.

So begins a magical journey through a starlit world filled with love and wonder. Soothing words and luminous pictures make this nighttime tale as comforting as a goodnight kiss.

Stephen Savage is the author and illustrator of Where's Walrus?, which was named a best book of the year by Publishers Weekly, Kirkus Reviews, the Horn Book, and the Bulletin of the Center for Children's Books. He is also the illustrator of the acclaimed New York Times bestselling picture book Polar Bear Night, written by Lauren Thompson, which was named a New York Times Best Illustrated Children's Book. When Stephen is not on the run, he lives in Brooklyn, New York, with his wife and their daughter.

Lauren Thompson is the author of many beloved picture books, including the New York Times bestseller Polar Bear Night, its companion Polar Bear Morning, and The Christmas Magic. She is also the author of the popular Little Quack and Mouse's First series. She lives in Brooklyn, New York, with her husband and their son. Visit her online at laurenthompson.net.