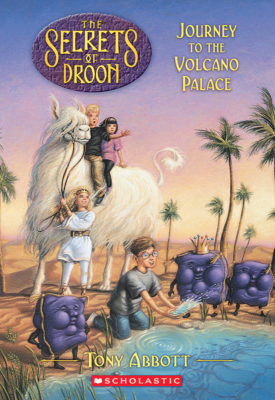 Eric, Julie, and Neal can't stop thinking about the magical world of Droon. They're even starting to dream about it. When all three kids dream about it on the same night, the decide to return and check on their new Droonian friends.

At the base of the magical stairs they find themselves in a huge desert. Camped in a tent nearby are their friends Princess Keeah, the wizard Galen, and Max. Keeah and Galen are on a quest to find the Eye of the Dawn, a magical jewel that the evil Lord Sparr has stolen from Keeah.

Their journey will bring them to Lord Sparr's secret volcano palace, where Keeah, Max, a purple Lumpy, and the three kids dodge the dangerous Ninns, meet a secretive water-witch, and discover one of Lord Sparr's biggest secrets. Lord Sparr can only keep his human form if he drinks from a magical pool. Otherwise, he turns back into a scaly beast.

In the end, Eric's bravery and quick-thinking allows our heroes to reclaim the jewel and escape from Kano. The kids head home for now, bidding farewell and promising to return to help Droon fight against Sparr.