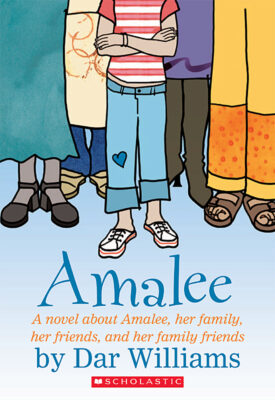 This sparkling fiction debut from singer-songwriter Dar Williams introduces an endearing new character to middle-grade literature.Amalee's world is all out of order. She's used to chaos, because of the frequent presence of her father's bantering, bickering group of fun friends. But when Amalee's dad becomes seriously ill, the chaos takes new forms -- and the ways of coping come from some very unexpected places. With clear-eyed, tender, funny prose, Dar Williams gives us a child's-eye view of a world under pressure, with everyone rising to the occasion in his or her own unique way. Both moving and wise, this marks the debut of a major middle-grade talent.
Dar Williams

Dar Williams is one of the most acclaimed singer-songwriters in America right now. Her albums include The Honesty Room, Mortal City, End of the Summer, The Green World, The Beauty of the Rain, and My Better Self.

Her first novel, Amalee, was published by Scholastic Press in 2004 and was "a poignant, funny debut" by Booklist. The follow-up, Lights, Cameras, Amalee, is being published in June 2006.