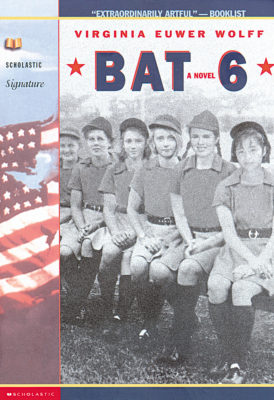 Told in the alternating voices of a cast of twenty girls, COMMUNITY SERVICE traces nine months in the life of two small towns in Oregon in 1948-49. The sixth grade girls of Bear Creek Ridge and Barlow traditionally play a softball game against each other each spring, called Bat 6. This year, Trout Creek Ridge reclaims Aki Yakamoto to its team. Aki and her family have been interned by the US government since 1942; both native and foreigner, Aki is welcomed by some but resented silently by others. Barlow has a real newcomer to its own sixth-grade: a girl who calls herself Shazam, with the best pitching arm either town has ever seen. Neglected by her mother, needy and angry, Shazam idealizes her dead father, who was killed at Pearl Harbor.
During the months of preparation that lead up to the game, one potentially dangerous situation after another is defused by the community, which prides itself on its American virtues of hard work, forebearance, and stoicism. But nothing can defuse the tensions at Bat 6, which explode the artificial morality of Barlow and Bear Creek Ridge in a shattering and shocking way.