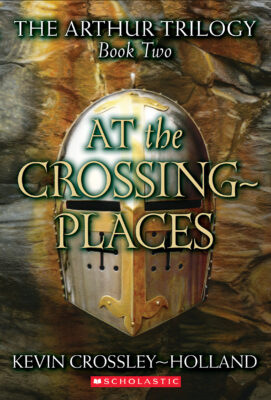 The Arthur Trilogy #2: At the Crossing Places

The second thrilling novel in Kevin Crossley-Holland's bestselling Arthur trilogyArthur de Caldicot has achieved his dream: He now serves as squire to Lord Stephen of Holt Castle. But this new world opens up fresh visions as well as old concerns. Arthur longs to escape the shadow of his unfeeling father and meet his birth mother. To marry the beautiful Winnie, but maintain his ties with his friend Gatty. And to become a Crusader, with all the questions of might and right involved. Just as he so brilliantly did in THE SEEING STONE, Kevin Crossley-Holland weaves Arthurian legend with everyday medieval life in the unforgettable story of one hero's coming of age.

Kevin Crossley-Holland was born in 1941 in Mursley, North Buckinghamshire, and grew up in Whiteleaf, a village in the Chiltern Hills of western England. He attended Oxford University, where, after failing his first exams, he developed his passion for Anglo-Saxon literature. After graduating, he was the Gregory Fellow in Poetry at the University of Leeds, and from 1972-1977, he lectured in Anglo-Saxon for the Tufts University of London program. He worked as a children's book editor while beginning to write his own poems and reinterpretations of medieval legends. He has also taught for extended periods in America. He now lives in Norfolk, England.

Kevin Crossley-Holland has published six volumes of adult poetry and several libretti for opera. In the world of children's books, he is best known for his numerous retellings and anthologies, and in particular his version of Beowolf. Storm, his novella, won the Carnegie Medal in 1985.

The Seeing Stone, published by Scholastic, is his only other work of original fiction. T.H White is the inevitable comparison for Kevin Crossley-Holland's new novel, American readers will also be reminded of Karen Cushman, for the earthy, rich portrayal of life in a medieval manor. Its sequel, At the Crossing-Places, was published in the United States in fall 2002. The third title in this trilogy is King of the Middle March, which will be published in 2003.