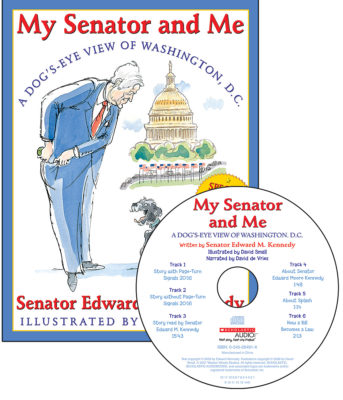 There's an old saying: "If you want a friend in Washington, get a dog." Senator Ted Kennedy decided to do just that. His beloved Portuguese Water Dog Champion Amigo's Seventh Wave (nicknamed Splash) is one of the most famous canines on Capitol Hill. Here we follow Senator Kennedy and Splash through a busy day in D.C., from press conferences to meetings with school groups to committee discussions to a floor vote. The result is an exciting, behind-the-scenes look at the life of one of the most energetic figures in American politics -- and, of course, his equally famous owner.
Edward Kennedy

Edward M. Kennedy represented Massachusetts in the United States Senate for forty-seven years. He took a special interest in matters that involved education and health care for children.

David Small is the illustrator of many award-winning books, including The Library, the Caldecott Medal winner So You Want to Be President?, and the Caldecott Honor books The Gardener and One Cool Friend. He lives in Michigan with his wife, the writer Sarah Stewart, and an outdoor cat named Mabel.