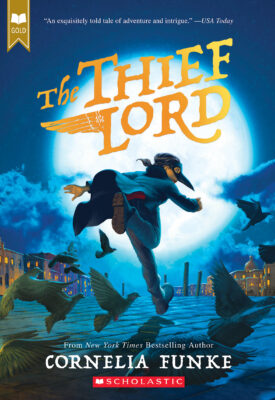 Two orphaned brothers, Prosper and Bo, have run away to Venice, where crumbling canals and misty alleyways shelter a secret community of street urchins. Leader of this motley crew of lost children is a clever, charming boy with a dark history of his own: He calls himself the Thief Lord.

Propser and Bo relish their new "family" and life of petty crime. But their cruel aunt and a bumbling detective are on their trail. And posing an even greater threat to the boys' freedom is something from a forgotten past: a beautiful magical treasure with the power to spin time itself.
Christian Birmingham

Birmingham has illustrated many books for children. His work has been shortlisted for several prestigious illustration prizes, including the Mother Goose Award, the Kurt Maschler Award, and the Kate Greenaway Medal.

Cornelia Funke is the internationally acclaimed, bestselling author of The Thief Lord, Dragon Rider, and the Inkheart trilogy, along with many other chapter and picture books for younger readers. She lives in Los Angeles, California, in a house filled with books.