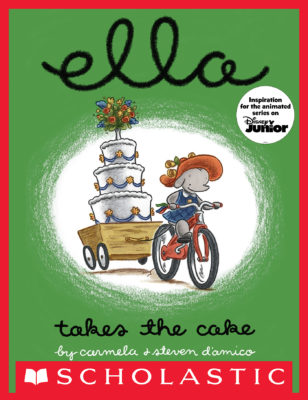 Ella the elephant is too little to slice the cake in her mother's bakery, and the oven is absolutely off-limits. It feels like she can't do ANYTHING important - until Ella's mother needs help with an emergency cake delivery. Then Ella peddles off on her trusty cart to prove herself, but there's a bumpy road ahead!

In her second magical adventure, Ella the elegant elephant shows that you're never too little to save the day - so long as you have a big heart.
Carmela D'Amico

--- - \\\\\\\\*STAR*D'Amico, Carmela. Ella Takes the Cake. Illus. by Steven D'Amico. Sept. 2005. 48p. Scholastic/Arthur A. Levine, $16.99 (0-439-62794-X).
PreS–K. Ella, who made her debut in Ella the Elegant Elephant (2004), returns to show herself as a take-charge child. Ella and Mother live in Little Village, which, with its whitewashed buildings and ocean views, seems to be a pachyderm French Riviera. At her mother's bakery, Ella always asks to help. Unfortunately, Mom thinks a job such as slicing pie is too dangerous, so Ella she comes up with a job of her own––delivering a three-tiered birthday cake in a wagon pulled by her bike. (The incongruity of this being safer than a cutting a pie seems odd.) Ella's friend hitches a ride, and, feeling helpful, asks Mr. Saw if he would like them to return his pile of library books. She then leaves Ella to finish the job, during which the cake nearly slides out of the wagon. Fortunately, Ella's magic hat and her own fortitude save the day. There are a few text glitches, but this has so much child appeal and such delightful artwork that it's hard to quibble. The pictures are reminiscent of both de Brunoff and Rey, but charming Ella makes the story her own. Especially fine are D'Amico's settings, inventively detailed, richly colored, and always focused on what the audience wants to see. This has favorite book potential. ––Ilene Cooper
Kirkus 8/15
The D'Amicos' extraordinary elephant embarks upon a second adventure full of all the thrills a young elephant can manage. Now settled into their community of Little Village, Ella and her mother spend a busy summer break in their bakery. Too small to pull out hot pastry sheets from the oven or handle pie knives and tired of wielding a broom, Ella is frustrated by her inability to help. However, when her mom needs a cake delivered, Ella rushes to the rescue, offering to bike it over in a cart. In the ensuing adventure, she is reunited with an old nemesis from the first story. This time around, Belinda Blue is less menacing and simply self-absorbed, causing hilarious and ultimately harmless havoc for the determined Ella. Lavishly hued illustrations offer readers an exotic oasis of sapphire seas and warmly inviting red tile–roofed houses. The quaint detailing of the pictures hearkens to an old-world Europe that is both charming and intriguing for readers to explore. (Picture book. 4-8)

SLJ 9/1
D'AMICO, Carmela. Ella Takes the Cake. illus. by Steven D'Amico. unpaged. CIP. Scholastic/Arthur A. Levine Bks. Sept. 2005. RTE $16.99. ISBN 0-439-62794-X. LC 2004023432.
K-Gr 2–The star of Ella the Elegant Elephant (Scholastic, 2004) returns for another adventure. Here, she wants to help in the bakery, but her mother thinks she is too little to do anything but sweep. Finally she is allowed to deliver a cake in her wooden wagon. She meets with many obstacles on her way, including bossy Belinda and a steep incline. When Ella successfully delivers the cake, she proves to herself and to her mother that she can be responsible. As in the first book, the D'Amicos create a sunny Mediterranean Elephant Island with bright pastels and colored pencil. The characters, though drawn with scant lines, have personality and charm. The story bogs down a little with dull dialogue near the beginning but picks up as the resourceful young elephant nears her goal. Fans of Elegant Ella will welcome this new tale - ! ' for others, it is a secondary purchase.–Donna Cardon, Provo City Library, UT'