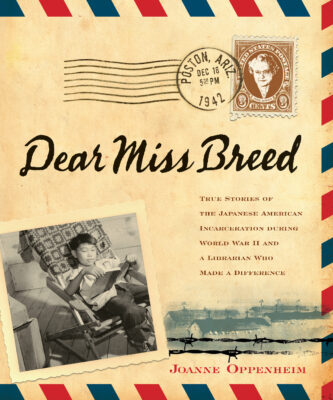 Dear Miss Breed : True Stories of the Japanese American Incarceration During World War II and a Librarian Who Made a Difference

In the early 1940's, Clara Breed was the children's librarian at the San Diego Public Library. But she was also friend to dozens of Japanese American children and teens when war broke out in December of 1941. The story of what happened to these American citizens is movingly told through letters that her young friends wrote to Miss Breed during their internment. This remarkable librarian and humanitarian served as a lifeline to these imprisoned young people, and was brave enough to speak out against a shameful chapter in American history.

Joanne Oppenheim is the author of more than fifty books for and about children. In addition, she is the president and cofounder of Oppenheim Toy Portfolio, Inc. One of the country's most highly regarded child development experts, Oppenheim is seen regularly on NBC's Today show, where she is a contributor.

Her latest book, Dear Miss Breed: True Stories of the Japanese American Incarceration During World War II and a Librarian Who Made a Difference, came about when Joanne was planning her high school reunion and began searching for Ellen Yukawa, a Japanese American friend. Through her search she discovered the website of the Japanese American National Museum in Los Angeles and the letters to Miss Breed. With the National Museum's help, Joanne eventually found her friend and discovered that Ellen had spent the war years at Poston, the internment camp in Arizona from where the letters to Miss Breed were sent. Eager to write about and share these stories, for three years Joanne Oppenheim worked on this book, locating and interviewing many of Miss Breed's "children." Joanne hopes that her readers view this story, not as an isolated event of the past, but rather as an event to keep in our collective memory to ensure that it doesn't happen again.

Joanne Oppenheim lives in New York City with her husband and is the mother of three grown children and the grandmother of seven.