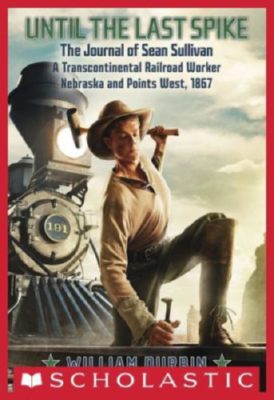 Series: My Name is America

It's August 1867 and Sean has just arrived from Chicago, planning to work with his father on the Intercontinental Railroad. Sean must start at the bottom, as a water carrier, toting barrels of it to the thirsty men who are doing the backbreaking work on the line. At night, everyone is usually too tired to do anything but sleep, yet Sundays are free, and Sean discovers the rough and rowdy world of the towns that seem to sprout up from nowhere along the railroad's path over the prairie. But prejudices run rampant for both the Irish and Chinese workers -- especially when they start a deadly race to see who can lay track the fastest. Through Sean's eyes, the history of this era and the magnitude of his and his fellow workers' achievements come alive.

William Durbin is the award-winning author of many titles for young readers, including THE JOURNAL OF SEAN SULLIVAN, A TRANSCONTINENTAL RAILWORKER and THE DARKEST EVENING, both published by Scholastic. A winner of the Great Lakes Book Award and a two-time winner of the Minnesota Book award, his other books are SONG OF SAMPO LAKE; THE WINTER WAR; BLACKWATER BEN; EL LECTOR; and THE BROKEN BLADE, as well as its companion, WINTERING.

Born in Minneapolis, William and his wife have lived on Lake Vermilion in the canoe country of Northeastern Minnesota for the past 20 years.