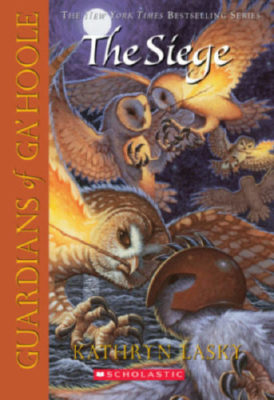 Guardians of Ga'Hoole #4: The Siege

Soren's beloved mentor, Ezylryb, is finally back at the Great Ga'Hoole Tree. But all is not well. There's a war between good and evil in the owl kingdom. On one side is a group led by Soren's fearsome brother, Kludd, who wears a terrifying metal mask to cover his battle-scarred face. On the other side are the owls of the Great Ga'Hoole Tree, who must fight to protect their legendary tree from Kludd's attacks.

Soren, his friends, and the other owls at the Great Ga'Hoole Tree enter into fierce combat against Kludd's forces. They win a major battle, but warfare will continue in Book #5.