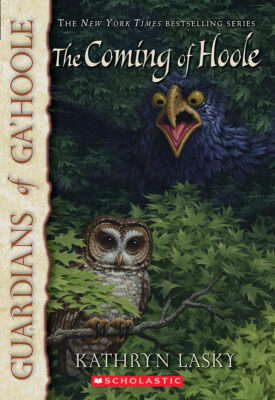 Guardians of Ga'Hoole #10: The Coming of Hoole

Grank raises the hatchling deep in a forest far from owls that would kill the royal chick named Hoole to end the kingly line. His mother comes to visit, in disguise, and departs again. Not even the chick must know his mother's identity. It would give him away as Hrath's heir. Sent by an evil warlord, a hagsfiend attempts to lure young Hoole away when he first learns to fly. Grank realizes that the same evil forces that killed Hrath are after Hoole, and know where he is. To keep him safe, Grank brings him to Beyond the Beyond, a strange land of fiery volcanoes in a barren, icy landscape.(more)