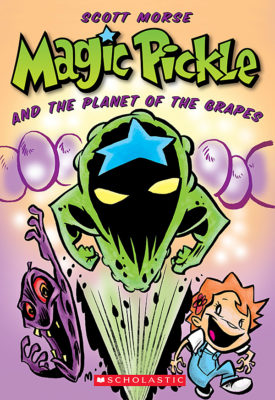 Magic Pickle & The Planet Of The Grapes

Magic Pickle is a secret weapon developed in a secret military lab---under little JoJo Wigwam's bedroom floor. The fearless dill superhero meets his match in this feisty eight-year-old. Together they go after Ray Sin, a renegade raisin from the Brotherhood of Evil Produce. Ray Sin has a dastardly plan: to turn every human being on the planet into big, juicy, mindless grapes, so he can rule the world!
Scott Morse