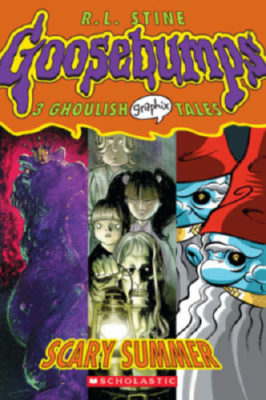 Three hot, talented comic artists adapt these bestselling Goosebumps books into a cool new graphic format.
Someone's creeping through the garden, doing nasty things! Dean Haspiel, a veteran of Batman and Justice League comics, knows just how to portray "The Revenge of the Lawn Gnomes."
In his comic series like The Bakers and Plastic Man, Kyle Baker proves he's one funny artist, the perfect guy to draw a story about fun and games at camp--until "The Horror at Camp Jellyjam" is uncovered.
Dean Haspiel