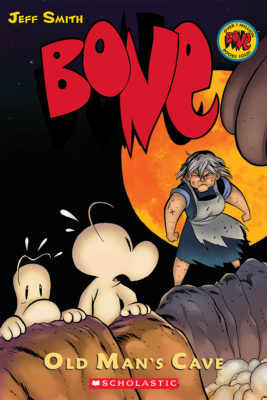 The thrilling BONE saga continues in book six. As war spreads through the valley, the Bone cousins join Gran'ma Ben and Lucius at Old Man's Cave to make a stand against the rat creatures.

But not everything goes as planned. By the end of the book, Phoney Bone is strapped to a stone altar and about to be sacrificed; Thorn is lying lifeless nearby; and the rumblings of an earthquake suggest that the Lord of the Locusts is about to be released. Fone and Smiley Bone must do something drastic to save their friends.

Jeff Smith is the creator of the award-winning, New York Times bestselling BONE series. He was born and raised in the American Midwest and learned about cartooning from comic strips, comic books, and TV animation. Visit him online at boneville.com.