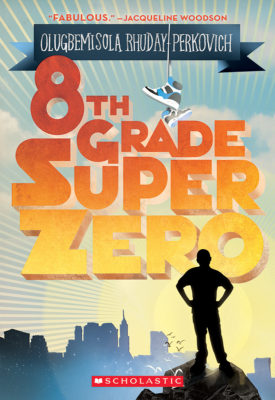 After the worst first day back *ever*, Reggie's been nicknamed "Pukey" McKnight at his Brooklyn school. He wants to turn his image around, but he has other things on his mind as well: his father, who's out of a job; his best friends, Joe C. (who's a little too White) and Ruthie (who's a little too intense); his ex-best friend Donovan, who's now a jerk; and of course, the beautiful Mialonie. The elections for school president are coming up, but with his notorious nickname and "nothing" social status, Reggie wouldn't stand a chance, if he even had the courage to run.

Then Reggie gets involved with a local homeless shelter. Inspired by the clients there--especially Charlie, a five-year-old kid who becomes his official "Little Buddy"- he begins to think about making a difference, both in the world and at school. Pukey for President? It can happen . . . if he starts believing.
Olugbemisola Rhuday-Perkovich

Olugbemisola Rhuday-Perkovich grew up in the United States, Nigeria, and Kenya, and studied writing with Paula Danziger and Madeline L'Engle. She lives in Brooklyn, New York. Visit her on the web at www.olugbemisola.com.