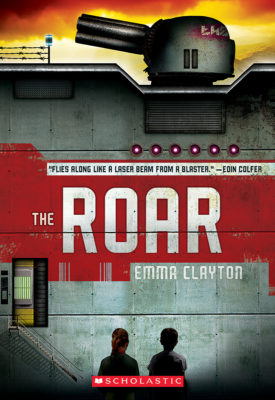 Mika lives in future London, behind The Wall: Solid concrete topped with high-voltage razor wire and guarded by a battalion of Ghengis Borgs, it was built to keep out the animals, because animals carry the plague.

Or so Mika's been told.

But ever since Ellie vanished a year ago, Mika's suspected his world may be built on secrets--and lies. When a mysterious organization starts recruiting mutant kids to compete in violent virtual reality games, Mika takes the chance to search for his twin sister--and the truth.

"A hugely inventive and entertaining read which grabs the reader by the scruff of the neck from the first sentence. It flies along like a laser beam from a blaster and sustains the breakneck pace until the stunning climax. A fresh and exciting take on sci-fi..."--Eoin Colfer

Emma Clayton lives with her two children in Leamington Spa, England. THE WHISPER is the sequel to her debut novel THE ROAR.