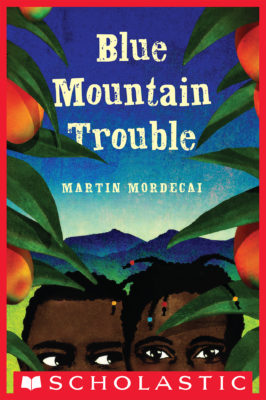 Way up in the misty island mountains of Jamaica live eleven-year-old twins Pollyread and Jackson Gilmore. Pollyread is smart as a whip and tart as a lime. Jackson's sweet as a mango. Both of them know all the rules of their village -- and how to break them.

Then a young thug named Jammy sweeps in to stir up the twins' world. He even seems to be targeting their family. But are Pollyread's smart mouth and Jackson's steadiness enough to take him on -- or will Jammy and his secret change the Gilmore family forever?
Martin Mordecai

Martin Mordecai was born and raised in Kingston, Jamaica -- far from Top Valley, where this novel is set. Martin's professions have included television, radio, journalism, and the foreign service, but he has written all his life. Martin now lives in Ontario, Canada, with his wife, Pamela. Blue Mountain Trouble is his first novel.

--- - ! 'Rain at night when it wakes you in your bed under a zinc roof (as long as the roof doesn''t leak) is the sweetest thought you can think, the warmest memory you can own. When you sleep your whole life under open windows in a place so quiet you can feel the night sky move, then rain when it wakes you is like God telling you stories. While you''re listening to the crackling laughter of lightning and the thunder clearing the sky''s throat, your feet search the bottom of the bed for the sheet Mama always leaves there, even in the hot months, and your toes wriggle into it so it becomes a second skin.

And through the boisterous rain-telling, and the rumbling thunder, beneath the thumping of your own excited heart, you listen for the sound you know will come: whining that is like a jagged knife tearing through the hullabaloo. This is Cho-cho. Who, by strict parental edict, is not allowed inside the house once the door has been closed for the night until first light next morning. "Lightning not going kill him," Poppa said more than once when the twins pleaded for the little mongrel. "He can stay under the house bottom like all the rest of the dawg them."

Cho-cho does -- right under the twins'' window. It is there that he begins his campaign, with a pitiful whine that comes through the heavy shroud of rain as easily as a needle going through cloth. Then, sensing some movement or interest above, no matter how faint, he scurries around to the door and starts scratching, scratching. The door is nearer to the parents'' bedroom than to the twins'', and Mama is a light sleeper. Like a strangely shaped creature joined by the darkness, the twins tiptoe to the door, slide the bolt, lift the latch, and swing it open to pull in the shivering dog, lock the door and carry the dog back to their rooms and get back into their beds -- all in a few seconds and without a single word being exchanged. Cho-cho plays his part too, unaccustomedly silent in gratitude.

His coat being soaking wet most times, there is no question of the dog being allowed further concession. To take his richly smelly body into either bed would be tantamount to signing a confession. So Cho-cho is bundled under one or other bed, covered with whatever can be found to keep him warm, and is shushed to sleep amid the stories that the night leans over the windowsill and tells, spitting raindrops onto your face.

Sometimes the rainstories become your dreams, and your dreams are a bridge back to the morning...'