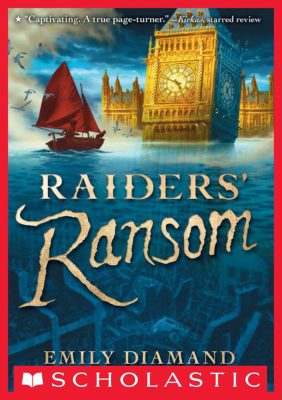 Winner of the inaugural Chicken House/London Times Children's Fiction Competition, which called it "a funny, clever, towering adventure."Because of climate change, much of 23rd-century England is underwater. Poor Lilly is out fishing with her trusty first mate, Cat, when greedy raiders pillage the town--and kidnap the Prime Minister's daughter. Her village blamed, Lilly decides to find the girl. Off she sails, in secret. And with a ransom: a mysterious talking jewel. Along the way she forms a wary friendship with Zeph, a punky raider boy. "If I save the Prime Minister's daughter," Lilly reasons, "he's sure to reward me." Little does Lilly know that it will take more than grit to outwit the tricky, treacherous piratical tribes!
Emily Diamand

EMILY DIAMAND is a lifelong environmental activist, and her concern for the earth greatly influenced the story of RAIDERS' RANSOM, her debut novel and the winner of the inaugural London Times/Chicken House Children's Fiction Competition. She lives with her husband and son in Yorkshire, England.