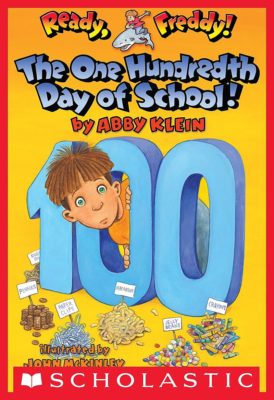 Ready, Freddy! #13: The One Hundredth Day of School!

With more than one million copies sold, this series is a huge Scholastic Book Clubs success. Klein presents a diverse community of 1st graders facing real issues that matter to this age group.The 100th day of school is approaching, and to mark the occasion, Freddy and his classmates must each collect and bring to school 100 of something. Freddy is overwhelmed by the thought, then he has a great idea to collect 100 shark trading cards. But he only has 21 cards! How will be get another 79 before the 100th day of school? Even if he had the money, his mom would NEVER let him buy that much bubble gum. Join Freddy as he plots the perfcet plan to reach his goal.The Ready, Freddy! series has content, humor, characters and vocabulary perfect for the early chapter-book reader.