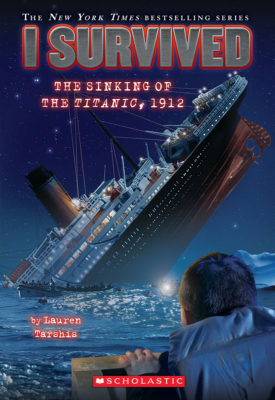 Ten-year-old George Calder can't believe his luck -- he and his little sister, Phoebe, are on the famous Titanic, crossing the ocean with their Aunt Daisy. The ship is full of exciting places to explore, but when George ventures into the first class storage cabin, a terrible boom shakes the entire boat. Suddenly, water is everywhere, and George's life changes forever.

Lauren Tarshis brings history's most exciting and terrifying events to life in this New York Times-bestselling series. Readers will be transported by stories of amazing kids and how they survived!

--- - The ship lurched.
“We're going down!” a man screamed.
George closed his eyes.
He told himself that he was really home with on his farm. That he was really safe under his quilts, with Phoebe snoring across their little room.
Slowly George opened his eyes.
No.
He was wide awake.
And there was nowhere for George to go but into the freezing water.