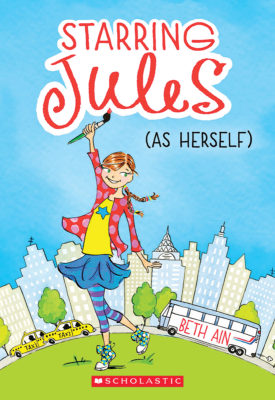 Things to Know About Me
by Jules Bloom

1. I am a scrambled-eggs-and-chocolate-milk type person.
2. I have an audition for a TV commercial (which would be great if I were a tall-icy-drink type person.)
3. I am in between best friends right now.
4. I am worried that the audition will be a disaster. (See #1 and #3!)

Jules doesn't want to ruin THE OPPORTUNITY OF A LIFETIME, and she's willing to turn to anyone for help--even her know-it-all ex-best friend! If only that lovely new girl in class would turn out to be the new best friend of her dreams, maybe, just maybe, Jules will be ready for her close-up....
Beth Ain

--- - ! "\"You know what?” Charlotte says. “I think you are kidding and that you are not at all allergic to those things. I think you just don't really want my help and what I think is that you are never going to get that commercial, Jules Bloom, and it serves you right, anyway, for dumping a superstar best friend like me in the first place.”
\t“I did not dump you, Charlotte!” I say louder than I usually speak. “You dumped me when you and the ABC's started whispering to each other about fancy towels at fancy hotels, which is exactly when you started liking lip gloss more than swing sets!”
\t“Well, why didn't you just say that in the first place?!? And maybe you're the one who likes swing sets more than lip gloss, and who says that's better anyway?!” Charlotte shouts back. Then she stomps away, and Brynn and Abby follow.
\tI stare at her for a long time after she walks away, and even though she said a lot of things, I can only think about the part she said about me not getting the commercial.
\t“She's probably right,” I say.
\t“About what?” Elinor asks.
\t“I won't get the commercial,” I say.
\t“No way,” Teddy says. “There has to be a scientific solution to this problem. I'll work on it and get back to you tomorrow.”
\t“We'll figure it out, Jules,” Elinor says. “I'm just excited that I've only lived in New York for a week and I already know an actress!”
\t“Who?” I ask. “Me or Charlotte?” At this, Teddy and Elinor crack up and we spend the rest of recess digging for worms that never come to the surface."