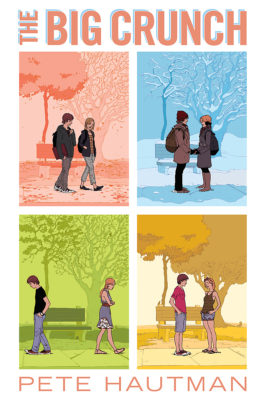 Jen and Wes do not "meet cute." They do not fall in love at first sight. They do not swoon with scorching desire. They do not believe that they are instant soul mates destined to be together forever. This is not that kind of love story.

Instead, they just hang around in each other's orbits...until eventually they collide. And even after that happens, they're still not sure where it will go. Especially when Jen starts to pity-date one of Wes's friends, and Wes makes some choices that he immediately regrets.

From National Book Award winner Pete Hautman, this is a love story for people not particularly biased toward romance. But it is romantic, in the same way that truth can be romantic and uncertainty can be the biggest certainty of all...
Pete Hautman

Pete Hautman won the National Book Award for his novel Godless. He is also the author of the acclaimed novels The Big Crunch, How to Steal a Car, Rash, Invisible, Sweetblood, Hole in the Sky, No Limit, and Mr. Was. His home in the world is Minnesota, and his home on the web is www.petehautman.com.