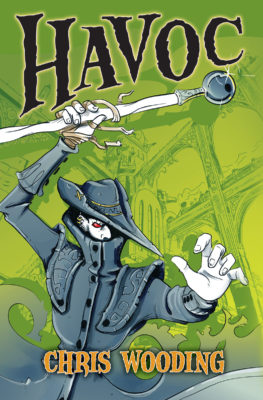 Everyone knows the rumors - if you gather the right things and say the right words, you'll be taken to Malice, a world that exists within a terrifying comic book.

Seth managed to escape from Malice, but it meant leaving his best friend, Kady, trapped there. And he's not sure whether he should try to take down the Malice comic from his own world or go back with an artifact he thinks can help from within.

Meanwhile, Kady has her own battles to fight. She's trying to find Havoc, a rebel group of kids who want to fight Tall Jake, Malice's cruel overlord. But she can't help feeling that someone's watching her and that Tall Jake knows what her plans are before she puts them into action.

Malice is spreading. Tall Jake is gaining influence on the world outside the comic. Seth and Kady think that if they gather the right objects and find the right people, they'll be able to defeat Tall Jake once and for all. The only question is . . . how?

Chris Wooding began writing at the age of 16, and his first novel, Crashing, was published when he was 19. Since that time, he's written dozens of novels in several genres, notably the award-winning The Haunting of Alaizabel Cray, Poison, Storm Thief, the Malice series, the graphic novel Pandemonium, Silver, and Velocity.