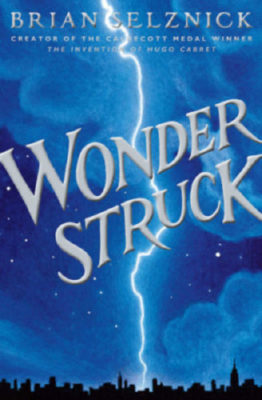 Ben and Rose secretly wish their lives were different. Ben longs for the father he has never known. Rose dreams of a mysterious actress whose life she chronicles in a scrapbook. When Ben discovers a puzzling clue in his mother's room and Rose reads an enticing headline in the newspaper, both children set out alone on desperate quests to find what they are missing.

Set fifty years apart, these two independent stories--Ben's told in words, Rose's in pictures--weave back and forth with mesmerizing symmetry. How they unfold and ultimately intertwine will surprise you, challenge you, and leave you breathless with wonder. Rich, complex, affecting, and beautiful--with over 460 pages of original artwork--Wonderstruckis a stunning achievement from a gifted artist and visionary.

--- - When Ben opened his eyes, he was lying on the floor, staring at the ceiling.

Something smelled terrible and burnt. Thankfully the rain had stopped and every­thing was silent and peaceful. He could go back to his cousins’ house now.

He wanted to get up but he felt so tired. The bed, the nightstand and the dresser seemed so far away, as if Ben were looking at them through the wrong end of his telescope. In the distance, he saw the blue telephone. It was off the hook and seemed to be smoldering. Then, through the windows, he saw something that seemed impossible. He saw rain still pouring down from the sky, streaking hard against the glass. He saw lightning flash without thunder.

How odd, he thought. The storm hadn’t stopped. Such quiet rain. It had been so loud before. Where had all the noise gone?