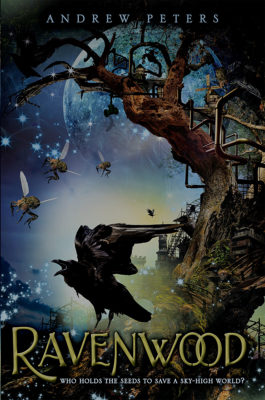 Arborium is at risk, the sharpened blades of rival Maw poised to saw off its bark and branches. What can a poor plumber's apprentice armed with little more than a monkey wrench do to stop the chopping?

Carved into a massive, mile-high canopy, the forest kingdom of Arborium stands upon the tallest of trees. Within them, 14-year-old Ark holds the lowest of jobs: unclogging toilets. He's already up to his elbows in gunk when he REALLY steps in it. He overhears a plot echoing through the pipes: Maw, a ruthless glass-and-steel superpower, is scheming to wield its axes of evil to strip Arborium of its wood -- a natural resource now more precious than gold.

The fate of a kingdom in the filthy hands of a plumber boy?

Plunged into danger, Ark must make the treacherous climb down to the darkest roots of RAVENWOOD if there's any hope of rescuing his threatened tree home!
Andrew Peters

ANDREW PETERS was born in Hildesheim, Germany, and raised in London, England. He has been climbing up and talking to trees ever since childhood. He now lives in Shropshire, England, with his wife and two children of their own.

--- - ! "With new eyes, he looked warily around at his world. All that he'd taken for granted: no longer safe. A humid mist blurred the edges of the huge leaves -- each one the size of a full-grown man. Above, below, behind, and in front, branch-lines and highways were woven and cantilevered together with rope, scaffolding, and a million iron nails. The whole sprawling treescape was punctuated by trunks of massive girth, large enough for the hundreds of houses, businesses, and hostels carved into the hollow depths. Ark had always believed that this vast island was the safest place on earth, lifted up and spread out as it was through the canopy of trees, a mile above the dank and dirty ground.
\tNot anymore."