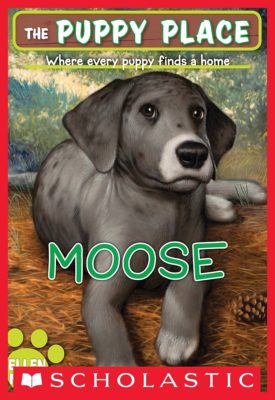 Charles is determined to help Moose, a giant Great Dane puppy. The problem is that this huge pup is scared of everything-loud noises, other dogs, even his own shadow! Charles has a lot of work cut out for him. With the help of his Aunt Amanda, Charles figures out a way to slowly get the dog adjusted to scary noises and fast movements. Once Moose is trained, his original owners are happy to take him back.
Ellen Miles

Ellen Miles loves dogs, which is why she has a great time writing Puppy Place books. And guess what? She loves cats, too! That's why she came up with a series called Kitty Corner. Ellen lives in Vermont and loves to be outdoors every day, walking, biking, skiing, or swimming, depending on the season. She also loves to read, cook, explore her beautiful state, play with dogs, and hang out with friends and family. Visit her website at EllenMiles.net.

Charles threw open the door of the van and leapt out, forgetting all about the rain, the thunderstorm, and his bare feet. "Oof!" He tackled the running dog, banging his knees and elbows on the pavement. "Hold on there," he said. "I''ve got you now." He hugged the dog close, noticing the way he shook and shivered with fear. "It''s okay, big guy," he murmured into one of the dog''s floppy ears.

The dog really was a big guy. He probably weighed more than Charles did. Charles had to lie on top of him with all his weight to hold him still. There was another loud clap of thunder.

Yeow! Get me out of here.

The dog squirmed desperately in Charles''s arms. He was strong as well as big. But Charles hung on tightly and he did not get away.'