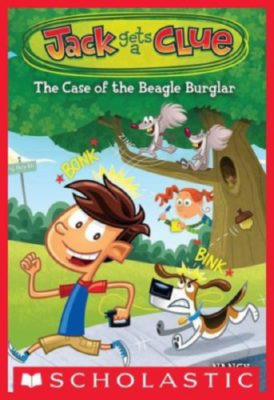 Jack Gets a Clue #1: The Case of the Beagle Burglar

Series: Jack Gets a Clue

Third grader Jack has a secret -- he can talk to animals! Can they help him crack this case?The day I found out I could talk to animals did not start out well. First, I couldn't find my lucky T-shirt. Second, my dog, Scout, dragged me around the yard chasing squirrels. And third, the squirrels threw a bunch of acorns at my head. After I was hit, I realized I could talk to animals! It sounds crazy but it's true. I could understand Scout, the squirrels, and every other animal--even bugs!My day got even worse when my best friend Leo's homework went missing. Leo blamed Scout! I know Scout's a dog, but trust me--he did not eat Leo's homework. But how would I prove it? There was only one thing to do--I had to talk to the animals around town. It was up to me, Jack Doyle, to get a clue and solve the mystery.

NANCY KRULIK has written more than 150 books for children and young adults, including three New York Times bestsellers. She is the author of the popular How I Survived Middle School, Katie Kazoo Switcheroo, and George Brown, Class Clown series. Nancy lives in Manhattan with her husband, composer Daniel Burwasser, their two children, Ian and Amanda, and a beagle named Josie.

Gary LaCoste began his illustration career in the toy and game industry, where his clients included Hasbro, Nickelodeon, and Lego. He has illustrated more than 25 children's books. Gary lives in western Massachusetts with his wife, Miranda, and daughter, Ashley.